This year marks the 400th anniversary of the arrival of the first enslaved Africans in colonial America. The first Africans arrived in Philadelphia circa 1639. Although the African American story cannot be told without Philadelphia, black history was largely excluded from public spaces. A chance conversation at a Kwanzaa celebration led me to sound the alarm about missing and damaged African American historical markers in Philadelphia. There is power in remembering the past. Lonnie Bunch, founding director of the National Museum of African American History & Culture, recently wrote:

You can tell a great deal about a country and a people by what they deem important enough to remember, to create moments for — what they put in their museum and what they celebrate. … Yet I would suggest that we learn even more about a country by what it chooses to forget — its mistakes, its disappointments, and its embarrassments. In some ways, African American History month is a clarion call to remember. Yet it is a call that is often unheeded.

In Philadelphia, we have heeded the call to ensure the ancestors are not forgotten. During Black History Month, we are checking on the status of African American historical markers.

In an essay published in PlanPhilly, I wrote about the unmarking of African American history:

Philadelphia’s streets are lined with history. The blue and gold signs issued by the Pennsylvania Historical Museum and Commission mark everything from the oldest medical library in the U.S. at Pennsylvania Hospital to 300-year-old Elfreth’s Alley.

But before 1990, there were only two markers associated with African American history installed in Philadelphia: First Protest Against Slavery (1983) and St. Thomas’ African Episcopal Church (1984). To fill the gaping hole in the American story, in 1990 Charles L. Blockson, founder and then-curator of Temple University’s Charles L. Blockson Afro-American Collection, launched the historical marker project. The project was funded by a grant from the William Penn Foundation. In the introduction to Philadelphia Guide: African-American State Historical Markers published in 1992, Bernard C. Watson, Ph.D., then-president and CEO of the foundation, wrote: “The Philadelphia African-American Pennsylvania State Marker Project is a modest first step toward correcting one of the most egregious problems in Philadelphia public history. Philadelphia, the birthplace of our independence, home of the Liberty Bell, the first capital city of these United States, is so rich in historical detail that the absence of signs and signposts to recognize and commemorate the nearly 300-year presence of Africans and then African-Americans, has been especially troublesome. They, too, were and are part of our history.”

Then as now, gentrification was unmarking black history. Dr. Blockson wrote this about the origin of the project: “When the project began, it became apparent that Philadelphia, like other American cities, was losing places of historical significance through gentrification and neglect. It is our hope that through the installation of the African-American historical markers, we can preserve the remaining sites and revive memories of past events and citizens who lived before us and made positive contributions to our nation.”

Jessie Redmon Fauset was among the first wave of markers dedicated in the 1990s. Her marker was installed in front of the North Philadelphia house in which she was living at the time of her death. 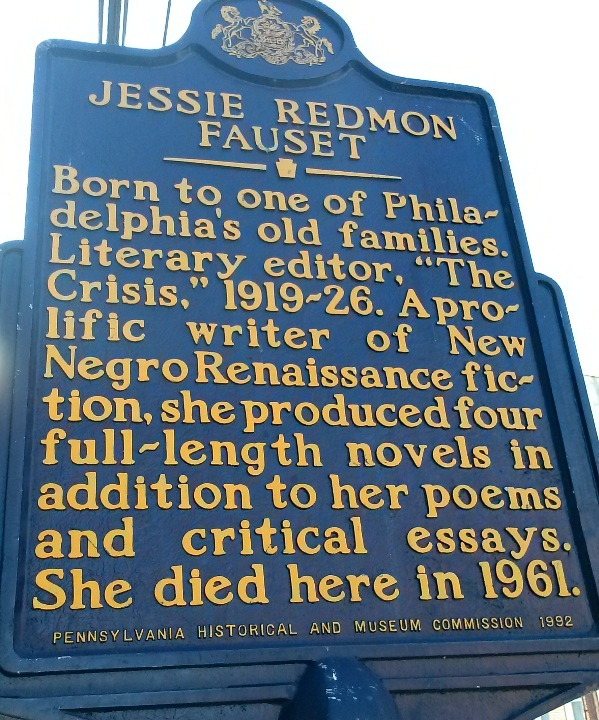 The February 18, 2017 issue of the New Yorker included an article by literary commentator Morgan Jerkins, “The Forgotten Work of Jessie Redmon Fauset.” The piece revived interest in Fauset’s literary work. However, the accomplished writer was never forgotten in Philadelphia. On its 150th anniversary in 1998, the Alumnae Association of the Philadelphia High School for Girls elected Fauset to their Distinguished Daughters Court of Honor. She was the first African American graduate of the prestigious public school.

Although former Sixer and NBA legend Charles Barkley played on a different court, he, too, honored Fauset by naming her a “Philadelphia Black History Month All Star” in February 2018. A few months later, Jacqueline Wiggins found an ugly patch on the sidewalk where Fauset’s historical marker used to be.