Like most enslaved Black Americans, Harriet Tubman did not know her date of her birth. So we remember the “Moses of Her People” on the date of her death, March 10, 1913.

In celebrating Harriet Tubman’s life, we remember her commitment to freedom and rededicate ourselves to the timeless principles she struggled to uphold. Her story is one of extraordinary courage and effectiveness in the movement to abolish slavery and to advance the noble ideals enshrined in our Nation’s Declaration of Independence: “We hold these truths to be self-evident, that all men are created equal, that they are endowed by their Creator with certain unalienable Rights, that among these are Life, Liberty and the pursuit of Happiness.”

After escaping from slavery herself in 1849, Harriet Tubman led hundreds of slaves to freedom by making a reported 19 trips through the network of hiding places known as the Underground Railroad. For her efforts to help ensure that our Nation always honors its promise of liberty and opportunity for all, she became known as the “Moses of her People.”

Serving as a nurse, scout, cook, and spy for the Union Army during the Civil War, Harriet Tubman often risked her own freedom and safety to protect that of others. After the war, she continued working for justice and for the cause of human dignity. Today we are deeply thankful for the efforts of this brave and selfless woman – they have been a source of inspiration to generations of Americans.

In recognition of Harriet Tubman’s special place in the hearts of all who cherish freedom, the Congress has passed Senate Joint Resolution 257 in observance of “Harriet Tubman Day,” March 10, 1990, the 77th anniversary of her death.

Cynthia Erivo starred in Harriet, the biopic for which she was nominated for an Academy Award for Best Actress.

Erivo also received an Academy Award nomination for Best Original Song for “Stand Up” which she co-wrote with Joshuah Brian Campbell.

I will stand up for Harriet Tubman at the Harriet Ross Tubman Monument in Bristol, Pennsylvania. 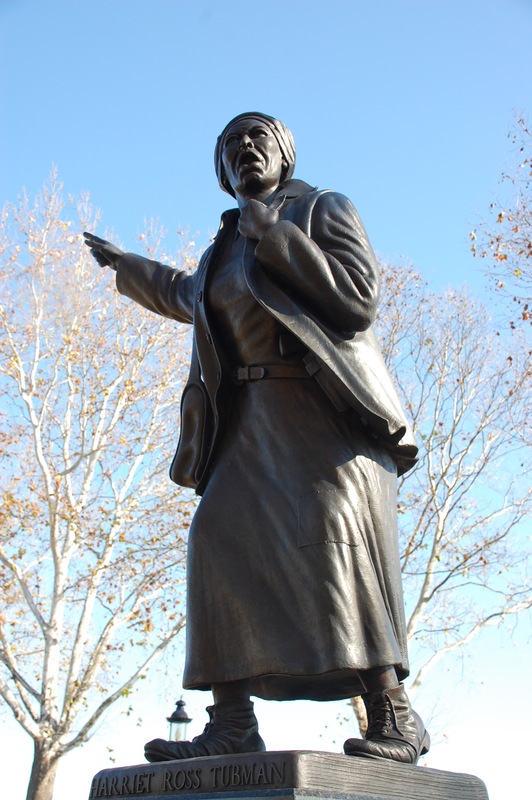 Sadly, partisan politics has delayed release of the Harriet Tubman $20 bill until 2028. Meanwhile, sections of Dixie Highway in Florida will be renamed in tribute to the iconic freedom fighter.